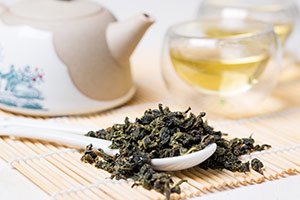 Ti Kwan Yin is one of the most famous teas of China and Taiwan. Known for its tropical, floral sweetness, this tea is an excellent choice for those new to oolong and those who've loved it all along.

As they brew, Ti Kwan Yin's ocean-colored, rolled leaves unfurl to reveal sweet, mellow, tropical aromas. The bright, clear, butter-yellow infusion tastes of tropical flowers dipped in sweet cream. Nuanced and ethereal notes of orchids and lilies interplay with the delicate sweetness of green grapes and dried apples, much like a fruity-floral, off-dry Viognier white wine. The floral, long-lasting aftertaste reminds you to return later for just one more cup…

The teahouse cultures of mainland China, Hong Kong and Taiwan have figured out exactly how to pair Ti Kwan Yin. Some of these foods are easy to get in the States. For example, salted pumpkin seeds and roasted, salted nuts are a simple find, and dried goji berries are increasingly easy to pick up or order.

Whenever and wherever you can get hold of them, buy Asian sweets with red bean paste, sweet potato or black sesame seeds to pair with Ti Kwan Yin. (But hey, even a slice of sweet potato pie would pair well in a pinch!)

Even better yet, around September or October, check your nearest Chinatown for "mooncakes" with exotic flavors like lotus seed, jujube (red date) or salted duck egg. These strange, wonderful, dense little pastries are the ultimate Ti Kwan Yin sweets! 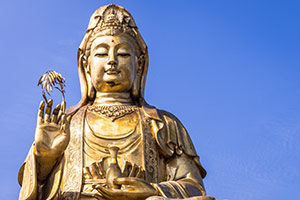 Story goes that there was once a tea farmer who was in financial dire straits. He went to pray to a Kuan Yin statue in a run-down shrine near his home. That night, Kuan Yin appeared to him in a dream and told him that he would find fortune behind the shrine where he had prayed to her. He rushed back, expecting to find gold. Instead, he found a few tea plants of a type he had never seen before. He harvested the leaves, processed them into tea and was shocked to find how sweet and fragrant they were. He sold the tea for a large sum of money. His financial problems were solved and he invested some of the remaining money in fixing up the dilapidated Kuan Yin shrine.

From then on, the tea maker planted, grew and harvested Ti Kwan Yin Oolong, and lived a happy life near the shrine.