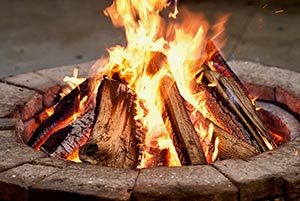 Like so many bold flavors out there, smoked teas are a love-it-or-hate-it kind of deal. And whether you love it or hate it, the first time you try one, you'll be surprised by just how bold and smokey its flavor really is.

Small, black leaves pack a big, blackened flavor in this intensely smokey brew. Aromas of pine smoke and exotic longan (dragon's eye fruit) waft from the burnt umber brew like, well, smoke. The velvety, thick taste of pine smoke glides across the palate, leaving an aftertaste of smoldering pitch. To understand this tea, think barbecue, campfire, bonfire… and then take it a step stronger from there.

This remarkably versatile tea is every bit as much at home at a tea party as it is a bachelor's party. Whether it's paired with smoked salmon finger sandwiches at afternoon tea or with grilled steaks, whisky and cigars on a late night, it smokes the competition. It's also great with breakfast foods, spicy Thai dishes with coconut-based sauces, lamb dishes, hard sheeps' cheeses (such as Manchego), saffron paella or pimento cheese on rye.

Legend has it that Lapsang Souchong was created by accident.

While war waged across the remote countryside of China, a tea producer had just finished harvesting a new batch of leaves. Just as he reached his small factory, eager to roll the leaves and dry them overnight, a band of bedraggled soldiers arrived and their leader commandeered the factory as sleeping quarters for the troops. The tea maker agreed, though he worried about how to dry the leaves before they went past their prime.

As the soldiers slept, he gathered as many wooden racks as he could find and rolled the leaves off to one side of the factory. As soon as the troops left in the morning, he spread the leaves over the racks. Lighting fires of pine boughs beneath each rack, he dried the leaves quickly, with the side effect of imparting the flavor of smoke and pine sap on them. To his amazement, the leaves were not ruined, but instead became some of the best tea he had ever tasted!