The Green Guayusa Tea Experience: Yerba Mate minus the bite 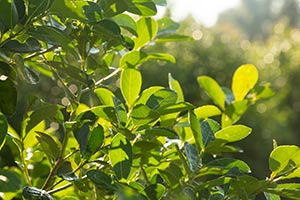 A lot of our customers love Yerba Mate. Some never could quite wrap their tastebuds around it. It seemed too intense, too bitter, too… something. And then they find our Organic Green Guayusa and it all makes sense: it's everything people love about Yerba Mate minus that thing they don't like about it. Yum!

Whether you drink this high-caf brew as an early morning wake-up call, an all-nighter study aid, a late-night energy booster or a backseat driver on a long road trip, this is a tea for re-brewing. Infuse it up to five times, increasing the brew time gradually and savoring the changes in aroma and flavor.

Guayusa is native to the Amazonian rain-forest and has been used as medicine for many generations. The earliest evidence of its use by humans was a bundle found in the 1500-year-old tomb of a medicine man's tomb in Bolivia. In the 1600s and 1800s, several Catholic missionaries wrote about its medicinal uses, and one Victorian-era botanist reported finding a grove of it that had been cultivated since pre-Colombian times (before 1492). Medicinal doses taken in rituals held by the Kichua and Jivaroan peoples are quite high, while social consumption in Ecuador and Peru is closer to the amount we recommend drinking.