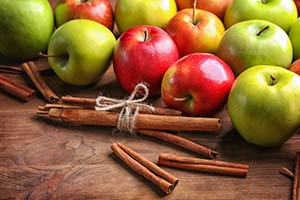 Cinnamon and apple is a classic combination. For example, apple pie gets much of its flavor from cinnamon. Is it the gently warming spice in the cinnamon oil that makes this combination so appealing? Or the fragrant, crisp juiciness of apples? Perhaps we’ll never know exactly what makes these two flavors get along so well, but we do know that this tea has just the right blend of the two.

As you sip this tea, you may immediately think of spiced cider or apple pie. Juicy apple and naturally sweet cinnamon meld effortlessly to create a sublimely warming brew. Nutty rooibos provides a gentle nutty finish. And with zero caffeine, Cinnamon Apple Rooibos is healthy treat anytime of day!

Like a warm slice of apple pie, Cinnamon Apple Rooibos is perfect with creamy desserts. Try it alongside a vanilla ice cream cake with warm peach compote, banana cream pie or pumpkin cheesecake.

Apples are the most widely cultivated fruit in the U.S. And for a good reason - it's both delicious and healthy! Apples are rich in dietary fiber and antioxidants. Studies indicate that eating apples may help decrease your risk of diabetes, lower cholesterol, and improve heart health. As the saying goes, an apple a day